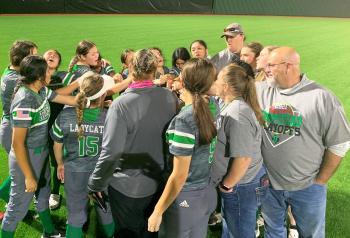 A handful of runs separated a young Hempstead Ladycats squad from the Hardin Hornets in a UIL Class 3A bi-district double-header bout Friday night at C.E. King High School.

Hardin advances to the second round of playoffs with the 4-2, 7-5 sweep. Hempstead head coach Casie Westbrook’s Ladycats’ season ends at 13-12 overall. HHS entered the postseason as the fourth seed from District 24-3A.

Going into the match-up, Westbrook had an idea of what her squad was facing against the District 23-3A Champions as the two teams formerly competed as district opponents.

“We were going in as the underdog and knew what to expect from them (Hardin),” the coach said in terms of seeding. “The girls came out and fought until the end and never gave up.”

The Hornets didn’t take long putting a run on the board against HHS in the first inning due to walks and errors moving a runner home, 1-0. Hardin tacked on another run in the fourth with a close tag at the plate, 2-0.

Hempstead’s offense did all its damage in the fourth. With the ‘Cats pitcher Katelyn Howard flirting with a no-hitter, the team worked to tie the game at 2-2. Hardin started making its errors and gave up back-to-back hits to Nataly Salinas and Callie Haack.

“We came out and held them in the first game, Westbrook said. “We came back, tied it up, and had a chance, but we just let it go.”

The Hornets scored the winning run in the bottom of the fifth and found its first hit off Howard. An insurance run would put the first game of the double-header out of reach for the Ladycats, 4-2. Hempstead outhit Hardin, 4-3, and had two miscues to the Hornets’ five.

Salinas, Haack, and Jaiden Deese finished 1-for-3. Mariana Venegas picked up two walks in the game. In game two, Hardin piled on a five-run second inning. Hempstead came back to get one back in the bottom of the frame. After the Hornets grabbed a 6-1 lead in the third and after a scoreless fourth, the Ladycats started to make things interesting with a three-run fifth to shrink the gap, 7-4.

A scoreless sixth followed before HHS pushed a run across to pull within 7-5 in the bottom of the seventh. Hempstead had another runner in scoring position, but Hardin nailed down the final to seal the sweep and advance.

“We got down on it in the second game and then we busted it open toward the end and gave ourselves another chance to win,” the coach said. “I can’t say enough good things about this team.”

The Ladycats’ Celeste Trujillo and Alyna Carrera went 2-for-4 with an RBI in game two. Venegas, Chloe Uvalle, and Haley Herbert finished 1-for-3. Salinas picked up another hit and pushed across a run.

“This team is young. There are no seniors. Essentially what we ended with today is what we will start with next spring,” Westbrook said. “We are hopeful and excited about next year, especially after what we accomplished this year. Our future is bright.”

Where Do I find?

We each have a role to play in stopping the transmission of COVID-19,  Just a few simple steps taken now will have a massive impact down the road in saving many lives in the weeks ahead:

We ALL need to do our part to protect the health and safety of our students, our staff and our community.

Hempstead ISD… One Town. One Team. One Goal!