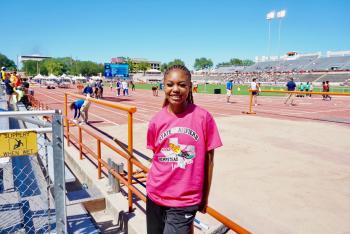 For the first time in her track and field prep career at Hempstead High School, junior Nikki London ran in her 400-meter dash lane against the best athletes in Class 3A University Interscholastic League (UIL) Track and Field State Championships.

London made the most of the experience and finished fourth with a personal record time of 58.99. She finished behind runners from Cameron Yoe, Shallowater, and Brock.

The talented junior made waves in the High Jump and joined her teammates in 4x100 Relay at the district, area and region contests.

“This season, I completed so many goals I set for myself,” she said. “I achieved a new personal record in all of my events.”

Making the sport’s biggest stage, however, came with some excitement. The HHS coaches had an idea that London would make it due to clocking a qualifying time, but it wasn’t until she received the news from her mom that it was official.

“The best part of this season was getting the message that I made it to state. My mom called and told me but, I thought she was messing with me. I didn’t believe it until I saw it on Hempstead Athletics Facebook post.”

The junior knows that her success comes from one place. “My role model is God. He brings me peace and strength when I feel unable.”

With her senior year just around the corner, she knows that it is her role model that will give her the ability to make her mark on the competition again. It is her result in 2021 that allows her to become a role model to the Hempstead community of athletes.

“A piece of advice would be to remain humble, remember that there’s always someone working towards the same goal as you, and never let another person discourage you about your race.”